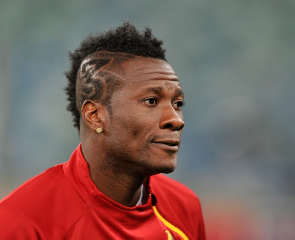 Black Stars Skipper, Asamoah Gyan could be dropped from the 23-man contingent for the 2019 African Cup of Nations in Egypt, Coach Kwesi Appiah has hinted.


This came to light when some journalists visited the coach with a prophet at his private residence in Kumasi.

The prophet (name withheld) had gone to tell the coach that he had had a vision that, “Asamoah Gyan and Andre “Dede” Ayew was returning from Egypt leading the national team with the African Cup that they had won for the country”.

But the coach reportedly impressed on the prophet to “work around Dede Ayew if he could, because Asamoah Gyan would be dropped since he’s battling with injury and also out of form”.

Kwesi Appiah, who has no option but to win the AfCON or lose his job, reportedly said, “I can’t rely on Gyan so it’s likely I would drop him”.

Ghana looks to win the AfCON after 37 years with a potential squad that has been labelled as “feeble and inferior”, as compared to the generation of the likes of C.K Akunnor, Stephen Appiah, Michael Essien, Laryea Kingston and Sule Muntari.

The coach is expected to present his 23-man squad to the Normalization Committee of the Ghana Football Association.

Captain Asamoah Gyan has however vowed that he would lead the team to make history in what could possibly be his last AfCON campaign.