Fenerbahce decide against signing Andre Ayew on a permanent basis 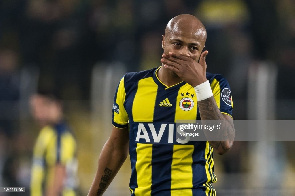 Fenerbahce will not be signing Ghana forward Andre Ayew on a permanent basis, GHANAsoccernet.com can exclusively report.


The 29-year-old will return to parent club Swansea City, at least initially after five goals in 36 appearances was deemed not good enough for the Turkish giants to consider splashing out a reported €17m fee to buy him.

Manager Ersun Yanal has told the club's board the 29-year-old is no longer part of his long-term plans, meaning he will return to England when his loan deal expires in the summer.

The Ghana international joined the Istanbul-based side on a season-long loan following the relegation of the Swans from the Premier League.

Fenerbahce president Ali Koç was keen to sign the Ghana international permanently but seems to have changed his mind after his dismissal performance in the second half of the campaign.

Ayew is one of the highest earners at Fenerbahce but has struggled to make the starting X1 in recent weeks.

Ayew's future has come under the spotlight amid a torrid campaign with The Yellow-Navy Blues.

Fenerbahce legend Ridvan Dilmen has surprisingly told the Turkish Super Lig side not to sign Ghana star Andre Ayew on a permanent basis.

During the last transfer window, the Super Lig side reached an agreement with Swansea so they could purchase the forward outright for €17m, but this no longer seems an option.

Ayew is contracted to the Swans until June 2021 and will return to the club to feature in the English Championship.