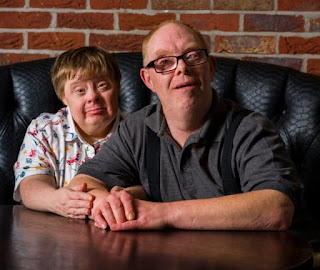 Gareth and Deana Tobias  who are officially the world’s first couple with Down’s syndrome to get married, are still inseparable 27 years later.
Gareth spoke about his love for his wife and bragged about having 3 girlfriends but says he chose Deana because she chose to put up with his excesses.
Gareth Tobias was just 17 when he met 19-year-old Deana and they both eventually tied the knot in front of 40 friends and family on July 4, 1992.
Gareth in a wide ranging interview with Metro uk said: ‘Before I met Deana I had three girlfriends. ‘I chose the right one, and that’s Deana.’
‘I put up with Deana and she puts up with me.’
Deana, 57, talking about the relationship said: ‘I thought “he’s ginger”. I like gingers. He had a beard at the time as well. A red one.’
‘I’m ginger as well.’ 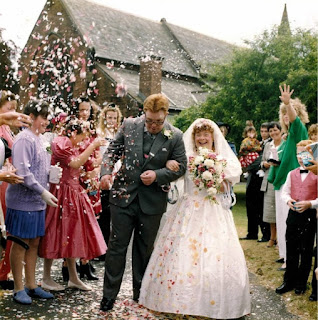 Gareth and Deana’s marriage is the longest of any couple with Down’s syndrome. The others are Paul and Kris Scharoun-DeForge, from Syracuse, New York, whose 25-year marriage ended with Paul’s death last year, and Maryanne and Tommy Pilling, from Essex, who’ve been married for 24 years.
Down syndrome (DS or DNS), also known as trisomy 21, is a genetic disorder caused by the presence of all or part of a third copy of chromosome 21. It is usually associated with physical growth delays, mild to moderate intellectual disability, and characteristic facial features.