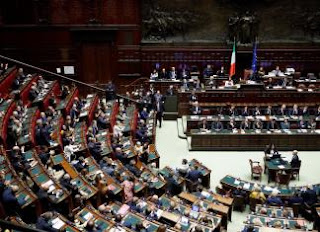 Italy’s parliament has voted to cut the number of representatives in both houses by more than a third.
The lower house approved a law to reduce the number of MPs from 630 to 400 and senators from 315 to 200.
The reform was a manifesto promise of the populist Five Star Movement, the main party in Italy’s governing coalition.
They say it will streamline parliament and save hundreds of millions of euros in salaries and expenses.
However, critics say the move will weaken democracy and increase the influence of lobbyists. The new law is potentially subject to a confirmatory referendum as it makes changes to the Italian constitution.
“It’s done! Promise kept” a blog post from Five Star said after the vote in the lower house on Tuesday.
In a post on Twitter, Five Star said the bill – which was supported by almost all parties – would save the country €1bn (£897m) over 10 years.
Source: BBC