Home » News » 2016 Elections: I would’ve voted for a sheep rather than Mahama – Manasseh

2016 Elections: I would’ve voted for a sheep rather than Mahama – Manasseh 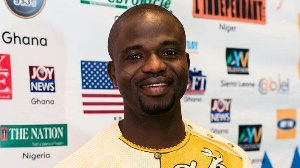 Award winning freelance journalist Manasseh Azure Awuni has said he was ready to choose a sheep as president rather than vote for then president John Mahama again in the 2016 election.


His article was a response to aide to former president John Mahama, Joyce Bawa Mogtari who claimed days ago, that Ghanaians have regretted voting out her boss, Mahama. Manasseh disagreed.

In a long article sighted by MyNewsGH.com, Manasseh said he was so disappointed with John Mahama in 2016 even though he voted for him in 2012, that even a sheep would have gotten his vote.

“In fact, if the only alternative to John Mahama in the 2016 election was a sheep, I would have voted for that sheep.”

Read the full context below

“I told myself in 2016 that no matter how terrible Akufo-Addo governs, I would not regret voting against John Mahama. This is how I described the John Mahama presidency in my latest book, “The Fourth John: Reign, Rejection and Rebound”:

“The John Mahama presidency was a cancerous tumour whose removal called for an eternal thanksgiving service. The John Mahama regime was a blot on the already decaying conscience of the nation, an error of an era, and a tragic accident in the history of our country.

The facts based on which I came to that conclusion are well-documented in that book. The obscenity and impunity of the Mahama government was getting out of hand and the nation was about to crash into an abyss. We needed a brake, a moment to pause and change course. For me, it was anything but John Mahama.

In fact, if the only alternative to John Mahama in the 2016 election was a sheep, I would have voted for that sheep.

Three years later, I am disappointed in the alternative. The “incorruptible and no-nonsense” personality of Akufo-Addo turned out to be a well-packaged lie. That personality turned out to be a poisonous bait some of us swallowed hook, line, sinker and rod, without questioning because we were too hungry for change.

But do not I regret voting out John Mahama. To help you reconcile these seemingly incoherent views, let me give you a scenario.

You marry a man who beats so badly and you divorce him because you fear for your life. Unfortunately, your next husband holds a PhD in advanced infidelity; he would sleep with any woman who gives him the least opportunity.

Both men are bad. You are considering a second divorce, and its not possible to live without a husband. But the two men are the only possible options you can choose from. Your former husband needs you back badly, but instead of being genuinely remorseful of his violence towards you, he comes telling you that you have regretted leaving him. The fact that your current husband is terrible does not offset the unacceptable behaviour of your former husband.”