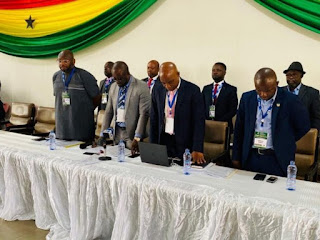 This was the maiden congress under the new GFA administration headed by Kurt Okraku.
The purpose of the Ordinary Congress was to deliberate and usher the delegates into the upcoming football season.
Here are five takeaways from the GFA congress which precedes the launch of the football season on Friday.
Finalisation of the number of teams to play in the Ghana Premier League
Congress voted to affirm the addition of two clubs (King Faisal and Great Olympics) to the new Ghana Premier League season.
Subsequently, this meant that members of Congress have increased from 120 to 124.
In addition, Congress voted to amend the statutes on relegation and promotion. Instead of five clubs being relegated from the Ghana Premier League, three clubs will now be relegated and three clubs will also be promoted to the Premier League from the Division One.
In essence, The Ghana Premier League will remain an 18 club league.
Election of the final member of the GFA Executive Council