Vetting of Justice Anin Yeboah to be held on Monday 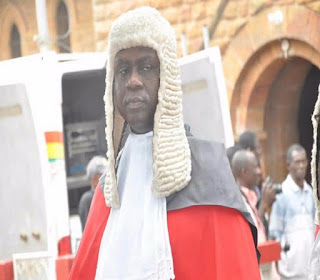 Parliament has rescheduled the vetting of the Chief Justice nominee, Justice Anin Yeboah, to Monday, December 23, 2019.

The vetting was to come off on Saturday, December 21, 2019.
A statement issued and signed by the Director of Public Affairs, Kate Addo, said the vetting would be held at the Committee Rooms 1&2 at the New Administration Block of Parliament.
President Nana Akufo-Addo on Thursday, appointed Justice Anin Yeboah as Chief Justice. His appointment is, however, subject to Parliamentary approval.
Who is Justice Anin Yeboah?
Justice Anin Yeboah is currently the fourth longest-serving Justice of the Supreme Court.
A graduate of the Ghana School of Law in 1981, he was appointed to the Supreme Court by President John Agyekum Kufuor in June 2008. Prior to that, he had served as a Justice of the High Court from 2002 to 2003 and a Justice of the Court of Appeal from 2003 to 2008.
Apart from being a Supreme Court Justice, Justice Anin Yeboah is also a part-time lecturer in Civil Procedure and the Ghana Legal System at the Ghana School of Law.
Justice Anin Yeboah’s name is also associated with football. In May 2017, he was appointed the Chairman of the Disciplinary Committee of the Federation of
International Football Associations.
He also served as the Chairman of the Appeal’s Committee of the Ghana Football Association from 2004 to 2008.
Source: Graphic.com