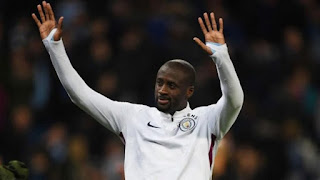 Racism in football is getting worse because “fans are more stupid than before”, according to former Manchester City midfielder Yaya Toure.

Several incidents throughout Europe have been reported in recent months, with many high-profile cases occurring in Italy’s Serie A.
“I’ve had a chat with Fifa because this is something very important,” said the former Ivory Coast international.

“It will be difficult because the way to win this case is going to be long.”
He added: “Fans, people, now are more stupid than before.”
Last month, striker Mario Balotelli, Toure’s former City team-mate, called fans who shouted racist abuse at him during a match between Brescia and Verona “small-minded” and “imbeciles”.
Cagliarifans made monkey noises towards Inter Milan’s Romelu Lukaku earlier in the season, and recently Italian newspaper Corriere Dello Sport was criticised for the headline ‘Black Friday’ alongside images of Roma defender Chris Smalling and Lukaku.
There have also been incidents of racism in British top-flight football, witha man arrested after this month’s Manchester derby for allegedly making a racist gesture.
Toure added: “Of course it is shocking because we are in 2019. In 2020, 2025 we have the kids coming through – what are we going to do? You can’t continue like that.”