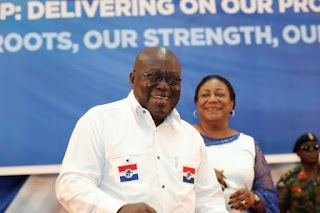 President Nana Addo Dankwa Akufo-Addo has picked nomination forms to contest the New Patriotic Party’s flagbearer position.
Director of Research at the Presidency, Victor Newman picked the forms on behalf of the President on Monday.
General Secretary of the party, John Boadu said the president is the only one who has so far declared his intentions to contest the flagbearer position of the NPP.
“He has satisfied the first rule by paying the GH?20,000 banker’s draft in favour of the party and we expect that before 20th of February, he will be able to finish filling the forms and attach the nomination fee of GH?200,000 for the process to begin,” he said in an interview.
The NPP will hold its Presidential primaries on April 25, 2020.
A non-refundable nomination fee for aspirants has been pegged at GHc20,000 whilst the filing fee is GHc200,000.