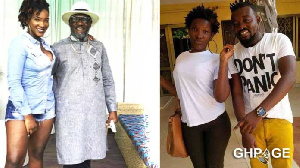 Nana Opoku Kwarteng aka Starboy Kwarteng who is the father of late dancehall sensation Ebony Reigns has revealed that his daughter’s former manager Bullet is free to attend her birthday party but he is not inviting him.
According to the CEO of Bony to the World records, Bullet whose real name is Ricky Nana Agyemang is his son and there is no need of him officially inviting him to the Queens birthday.
He added that in actual fact Bullet should have even been part of the people who are trying to celebrate Ebony’s birthday and her 2nd anniversary but due to some reasons he isn’t.
Also Read: Starboy Kwarteng fired on social media for trying to organize a birthday party for late Ebony
Nana Opoku Kwarteng in an interview made mention that he has heard people talk against his plans to organize a birthday memorial for his queen but he won’t back down and would continue to celebrate his daughter every year until he finally joins her one day.

After the demise of Ebony, Nana Opoku Kwateng and Bullet got involved in a back and forth accusation and allegations but some industry personnel stepped in and helped to settle the case between the father and former manager.