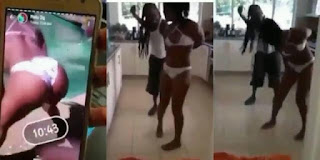 A father nearly killed his daughter for uploading a nude video of herself twerking on her WhatsApp status.
The angry father after watching the explicit video took his belt off and dragged her daughter to his room for the severe beatings.

The canning received by the small girl rendered her speechless and heartbroken.
READ ALSO:  Sarkodie,Cardi B, DJ Khaled, Others Nominated For 2019 BET Hip Hop Awards

The father’s brother who was present and as well the camera man after recording the severe beatings noted that; spare the rod and spoil and child.
Twerking has become the order of the day with many ladies enjoying the sex arousing act.
The father infact must be awarded for disciplining her ‘spoilt’ daughter rightfully.