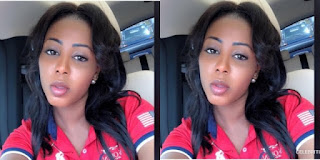 Days ago, Ghana was hit with the funniest but shocking video of our National Security having a love video call with his side-chick.
Many people least expected an Honorable member of his caliber to fall flat for a slay queen who intend turned him to a ‘remote control’ using his left and right per the leaked video.

They were discussing trivial issues like what he was wearing, which brand of clothes he was in and others.
He also indicated that he slept well when he received a hug from her the other day they met.
READALSO:  Crocodilesurfaces with missing man in its jaws after biting his groin anddragging him under

The whole video would have been a no interest for the general if he was to be in Ghana but he was by then in Europe attending to matters bothering Ghana’s security.
That caused Shatta Wale, Yvonne Nelson, and Kennedy Agyapong to react.
Many people disclosed that the lady is known as Chantelle Kujawu.
Others linked her to be a stronger person in the NPP and as well connected to many top officials.
Being a hard-working factual brand, we received an exclusive, authentic and fact-high information about who the said lady is and where she picks her runnings.
READALSO:  ProducersTo Release 'Kunfu Hustle' 2

We received a DM from one of our loyal Followers of which we can’t disclose his or her identity due to our assurance to him or her that we would keep his or her identity out of the scene.
From our conversation, we found out that her real name is Gertrude Bedzo.
She is from Akatsi and one of the topmost slay queens Ghana can boast of in recent time.
According to our loyal fam, she is also a fraudster who deals with only Ministers. She is as well very connected in the New Patriotic Party (NPP) especially during former President Kuffour days as Ghana’s leader.
READALSO:  96year-old man marries his 73-year-old girlfriend

She is said to be living in Canada, Montreal to be precise.
The source also added that she runs Ghana when NPP is in power.
Immediately, our team made moves to Akatsi within the Akatsi-South Municipality of the Volta Region and we truly got in touch with her details there.
We were told her name sounds familiar and that she hardly comes home. 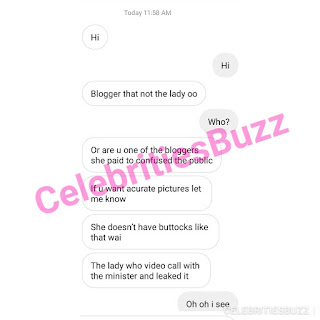 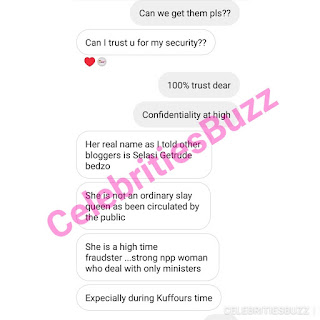 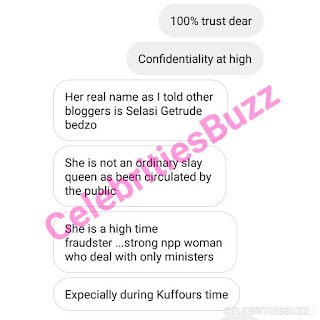