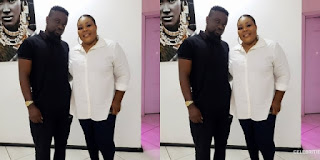 Ghanaian gospel musician, CeccyTwum is set to feature CEO of SarkCess Music, Michael Owusu Addo aka Sarkodie on her upcoming project.
Ceccy Twum is one of Ghana’s leading Gospel Musicians who have been able to stay up and running for over a decade now.

He shared an after studio photo with Sarkodie and called on all to anticipate her next move.
We all know for a fact that the pair are dropping fire because Sarkodie never goes out of his circles if it ain’t a business.
Fans of the two are currently calling for the song to be released as soonest.