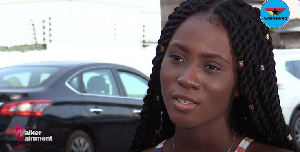 Ghanaian female singer, Christie Quincyna Quarcoopome, popularly known as Cina Soul says she would have to be well-prepared, particularly vocally if she gets a chance to feature Efya on a song.
Cina who was speaking in an interview with GhanaWeb's entertainment show, “Talkertainment” says her first song with Efya would have to be an extraordinary piece, in that, she would have to put in lots of effort.
Pulling out a look list of her favourite Ghanaian artists which includes Sarkodie, Stonebwoy, among others, the soul singer named Efya as her role model currently in the showbiz industry.
“Efya is like a big sister to me. If I have to get her on a song, it means I’d have to do a vocal training for six months. I have to give it my all because she is amazing. I look up to her so much. I won’t just get up to do a song with Efya, it has to be well-prepared,” she stated
She also hinted of releasing an album this year which might have some possible collaborations with some of her favourite artists.