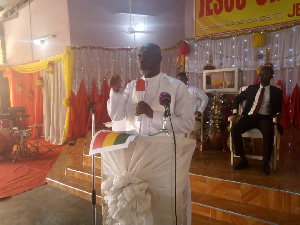 The founder and general overseer of the Open Arms Ministries in the Ashanti Regional Capital Kumasi has begun a crusade announcing that the Lord Jesus Christ has chosen Ghana as his nation and made Kumasi His Holy Capital.
According to this rather eccentric man of God who dresses in a white apparel to match his white beard and white pair of shoes, he is the one appointed by Jesus to represent him as supreme ruler of Ghana.
Already is administration over Ghana has begun as the Lord Jesus Christ he claims; has instructed Ghana to use the "ofata" song sung by the late Rev Kusi Berko as the nation’s National Anthem.
Per his revelation, Ghana’s Independence Day has also been divinely changed from March 6 1957 to the 15 TH of July 2015.
Republic Day is to be marked on the 23 rd of August and rather called thanksgiving day.
The Ghana Flag will, however, maintain its colors but without the black star in the middle.
If Accra has not been able to achieve its target of becoming the cleanest city in West Africa; there is more to it than meets the president’s eye. His revelations tell that until Kumasi becomes the cleanest and third richest city; Accra can forget it.
“There are three financial capitals in the world. New York first, London second and Frankfort third but the holy city of Kumasi is going to overtake Frankfort to become the world’s third financial capital,” he proclaimed.
Already some reshuffling and dismissal of incompetent government appointees have been penciled on the tall list of duties of Gana’s Appointed Ruler.
Names from the divine order include some magistrate court judges in Kumasi some local chiefs and the Minister of Special Development Initiative who has been divinely ordered to resign over the delay in releasing the ambulances or face the wrath of God.
Very soon ST SARK is expected to storm parliament, diplomatic missions and the presidency with Jesus’ divine instructions on how Ghana should be governed cardinal among which are terms for each president.
He contends these letters will come on the letterhead of the Special Office of the Lord Jesus Christ On Earth and warns of untold calamities to befall any office which sweeps any letter from his office under the carpet.
Without stating who will constitute this office, he points out that Member of Parliament for Assin Central Kennedy Agyeapong will be used massively by Jesus Christ in his rulership of the country.
He has dared the President Nana Akufo Addo and his Vice to be humble and obedient to him as he champions the new order that has been prescribed by God.