New VGMA board to determine fate of Shatta Wale, Stonebwoy 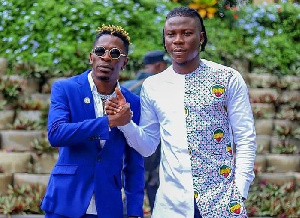 As Charterhouse, organisers of the Vodafone Ghana Music Awards call for entries for the 21st edition of the scheme, Head of Public Events of the company Robert Klah says the inclusion or otherwise of Stonebwoy and Shatta Wale will be determined after the board is reconstituted.

The two dancehall giants were banned indefinitely from the awards scheme, stripped of all the awards they won last year and asked to return the plaques after they disrupted the 20th edition of the event.

"The board of the 2019 Vodafone Ghana Music Awards deems the actions of Shatta Wale and Stonebwoy to have flouted the terms and conditions of the scheme, brought the name of the event into disrepute and therefore wish to sanction the two as follows:

"Both musicians are hereby banned indefinitely from participating in the nominations, selections and performances at the Vodafone Ghana Music Awards scheme.

"Also the two artistes are hereby stripped of all the awards they won at the 20th VGMA and are thus requested by the board to return all plaques in their possession to Charterhouse effective immediately," read a member of the board, Amandzeba at a press conference held by Charterhouse at the Alisa Hotel.

With January 31, 2020 as the deadline for filing of nominations, Mr. Klah mentioned in an interview with MzGee on 3FM’s ShowBuzz that the board will be reconstituted before the deadline.

“As it stands, the resolve of the board still holds. When the board reconstitutes, they can decide whether the ban should be lifted or not,” he said.

“Reconstitution of the board is happening this month. Submissions are going to end on 31st but it doesn’t necessarily mean that work on nomination ends because when the board is working and they feel some particular music has done well, they can find out if submissions have been made and if submissions have not been made, sometimes, they reach out to the persons involved just to find out if they are willing to tender in. These are some of the things that happen in the background.”

Asked if Stonebwoy and Shatta Wale have returned the plaques as instructed earlier, Klah said, “That information will be shared by the reps of the board” when it’s reconstituted.

While Stonebwoy was up the VGMA stage taking his award, Shatta Wale, his rival on the music scene, was seen approaching the stage with a host of others presumed to be his fans.

Stonebwoy who felt threatened, pulled out a handgun handed him on stage by one of his entourage, a scene that sparked a scuffle between the two artistes and their followers.

The awards event was temporarily halted and the topmost two awards for the event, Most Popular Song of the Year and Artiste of the Year, were deferred due to the melee.

Both Stonebwoy and Shatta Wale were invited by the police for questioning the next day and have since been charged and put before court. They have pleaded not guilty to the charges against them.
I won’t return VGMA plaques – Stonebwoy

Stonebwoy in an interview on Hitz FM disclosed that he had not returned the award plaques he won at the 20th edition of the VGMAs as directed by the board because he does not see the need to do so when his fans voted for him.

“It’s double disrespect to even carry the plaques to Charterhouse. I didn’t steal the awards… my fans voted,” he said.

Following the brawl that ensued, Shatta Wale who claimed he approached the stage to congratulate Stonebwoy, announced his decision to boycott subsequent editions of the event.

“Upon sober reflections of events in recent times and having made broader consultations, I wish to announce that I will not be part of the Ghana Music Awards scheme going forward. God bless!” a post on his social media pages read.

Barely a month after the brouhaha, the two artistes united during a press conference at Marriot Hotel in Accra.

Before the press conference, they had shared photos that indicated they had met to smoke the peace pipe.

Touching on the possibility of joining the scheme should organisers rescind the ban placed on them, Stonebwoy said they were open for possibilities.

Their peace concert dubbed 'Ghana First Concert' which they announced would happen soon, has however not seen the light of day.