Home » News » New Voters' Register: "I Feel There Is Some Level of Bitterness In The NDC" - Pius Hadzide

New Voters' Register: "I Feel There Is Some Level of Bitterness In The NDC" - Pius Hadzide 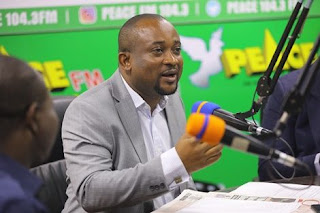 Deputy Minister of Information, Pius Enam Hadzide is appalled by the behavior of the opposition National Democratic Congress (NDC) following a proposal by the Electoral Commission to compile a new voters' register.
The Electoral Commission has asked Parliament to approve GH¢444,846,663 for the compilation of a new voters' register which it believes will be more credible and efficient than the existing one.


However, the NDC and some other political parties are against this decision.
According to them, there is nothing wrong with the current register.


Speaking to the controversy surrounding the new voters’ register, Pius Enam Hadzide says the NDC seems to have a personal vendetta with the current EC; perhaps because of how Charlotte Osei, a former EC boss appointed by John Mahama was treated.

"I feel there is some level of bitterness in the NDC; I don’t know if it's because of the defeat in 2016 or the actions against the former Commissioners. I think it’s high time they get rid of that bitterness," he said on Peace FM's morning show 'Kokrokoo'.
The Deputy Minister has also accused the largest opposition party of attempting to stampede the work of the EC with its words and actions.
According to him, "I’m greatly appalled by the behavior of the NDC; they want to stampede the work of the EC and that is against the constitution. It is not for any political entity to tell the EC what to do. We cannot set that precedent . . . they should stop interfering in the work of the Commission."