NPP gurus set Kan Dapaah up – A Plus alleges 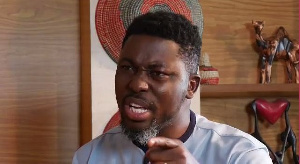 Political satirist A Plus has accused bigwigs in the governing New Patriotic Party (NPP) of setting up the Minister of National Security, Mr Albert Kan Dapaah over his leaked amorous video with an unknown lady.

A Plus claims the NPP gurus had schemed a plan of sacking the National Security Minister from office, hence they contracted the lady to record their conversations.

Mr Kan-Dapaah in the leaked video was seen modelling in his pyjamas, in what appears to be a hotel room while he had a video call with a lady whose long-nailed fingers were the only things about her that could be seen.

In the amorous chit-chat, the national security chief appeared to have let down his guard and was totally under the control of the voice of his seductive interlocutor.

Speaking with Kwabena Prah Jnr on ‘Ghana Yen som’ on Accra 100.5FM, A Plus alleged that bigwigs in NPP are fond of using sex tapes to drag their members’ names in the mud.

He cited an example where some people alleged that President Nana Addo Dankwa Akufo-Addo smoked weed and killed his wife in the run-up to the 2016 elections.

A Plus expressed doubt that the Minister’s opponents who belong to the main opposition National Democratic Congress (NDC) will hatch such a plan.

“If you ask me, I will tell you some NPP bigwigs set Kan-Dapaah up, that is what they do within the party, they use sex tapes to blackmail members they don't have good rapport with. It’s their character to bring down good people in the party, those who set him up should bow their heads in shame,” A Plus stated.

He called on the public especially detractors of the Minister not to be excited about his leaked video, advising them to put a stop to leaking sex tapes which have dire consequences on the party.

A Plus, however, advised Mr Kan-Dapaah to resign.