Only committed players will play for the Black Stars- CK Akonnor 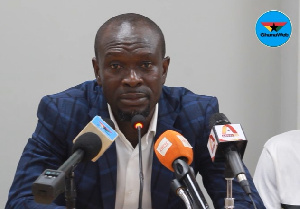 Black Stars coach Charles Kwabla Akonnor says only committed players will feature in his team.
Akonnor made mention of this in his first interview with the Ghana Football Association Communications Department after his appointment.
According to him, players invited will have to show that they are committed and ready to play for the national teams.
“To play for the national team they must show commitment. It doesn’t matter if they are stars in their club teams”, he said in the interview.
Akonnor also revealed that he has spoken to Black Stars captain Andre Ayew after his appointment.
Ghana Football Association President, Kurt Okraku confirmed at the Meet The Press meeting with the media that Akonnor is outside the country performing his duties as Black Stars coach.
The former Asante Kotoko coach is currently in Europe to meet players of the Black Stars and outline his visions and plans to them.
Akonnor’s first game as Black Stars coach will be against Sudan in the 2021 Africa Cup of Nations qualifier in March.