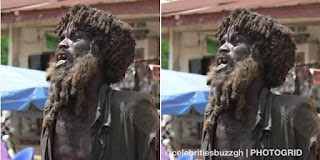 The Kojokrom township in the Sekondi-Takoradi Metropolis has been thrown into a state of shock after news went viral of the alleged murder of a commercial driver in the area by a mentally deranged man.

The victim has been identified as Samuel Biney affectionately called “Joe Otewtam”.

Elderly brother of the deceased told Empire News’ Emmanuel Ohene-Gyan that the said lunatic is mostly spotted with offensive weapons, terrorising unsuspecting residents.
READALSO:  NanaAppiah Mensah set to pay Menzgold customers on 15th April 2019
He said the suspect, now at large, is reported to have attacked a young man at the Kojokrom lorry station but Samuel Biney who is now deceased overpowered him and disciplined him.
Few days later, the suspect also spotted the deceased and stabbed him. Biney was rushed to the St Benedict hospital at Inchaban but was pronounced dead later.
READALSO:  ProphetNigel gives prophecy on 21 Banks that'll collapse before September2019

At the time of filing this report, Ohene-Gyan reported that the family were at the Kojokrom police station to lodge a complaint.
The body was yet to be conveyed to the morgue for preservation and autopsy.