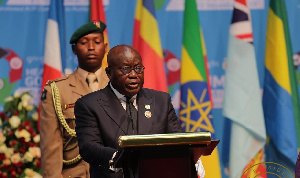 President of Ghana, Nana Akufo-Addo is reported to have thrown his weight behind the decision taken by the GFA to sack Kwesi Appiah from his role as head of the Black Stars.
The 59-year-old gaffer was relieved off his duty as Black Stars head coach after the Ghana FA dissolved all technical teams of the national teams.
President Akufo-Addo has been an advocate for local coaches and was instrumental in the re-appointment of the former Ghana international.
The below-par performance from the Black Stars has largely been blamed on Kwesi Appiah who according to critics has failed to create a winnable side since taking over the team two years ago.
Consequently, officials of the Ghana FA and the first gentleman of the land met to discuss the former Al Khartoum Watani gaffer’s dismissal before the announcement was made.
Ghana has been on an elusive search for a fifth AFCON trophy since annexing the fourth one in 1982.
Earlier this year, Kwasi Appiah led 23 players into the Africa Cup of Nations with a vow to end the wait for the coveted trophy.
It, however, turned out to be Ghana’s worst performance in the last six editions of the tournament with the country exiting at the round of 16 stage.
The ex-international signed a two-year contract in May 2017 for a second stint with the Ghana national team.
Despite the initial running out in May last year, he was told to stay on for the two 2021 Africa Cup of Nations qualifiers against South Africa and Sao Tome and Principe — which he won.