VRA to supply to export power in 2023 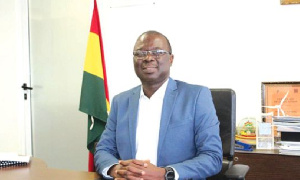 The Chief Executive of Volta River Authority (VRA), Mr Emmanuel Antwi-Darkwa, has announced that VRA will supply power to Mali and other West African countries by 2023.

“We have the resources to supply power beyond our jurisdiction and dominate the sub-region. We have reasons to believe that we will be dominant because we are efficient compared to our colleagues in the sub-region.

“We have better indigenous resources required for efficient power generation; we are not that bad. We are a very sophisticated energy sector comparable to the industrialised countries,” he said.

The chief executive of VRA made this known during a ceremony organised by the Africa Centre for Integrity and Development (ACiD) on Friday, December 20 in Accra.

The award ceremony was organised to honour Mr Antwi-Darkwa for his hard work and integrity in the energy sector.

The event was attended by ACiD staff, including the Executive Director, Mr Ibrahim Isshaq Tahir, and his Deputy, Ms Priscilla Serwah.

He said it was important to acknowledge the hard work and integrity that individuals exhibited in the discharge of their duties to serve as an example to others, especially the youth.

He said “it is for the sake of prosperity that we are doing all these things, so that others will see and scale-up”.

Mr Anane revealed that ACiD had begun another search for outstanding organisations which would be acknowledged duly.

“We are doing a background check for other organisations so that we can reward those who are doing the hard and honest work.

“We search for public sector organisations that portray fairness in their procedures, procurements, as well as those who fight against corruption and help with the development of the country,” he stated.