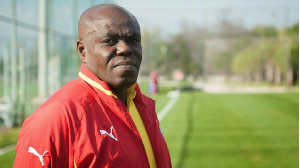 Tetteh, current coach of Sierra Leone, is among the list of local candidates reportedly up for the possible appointment to succeed James Kwesi Appiah whose contract runs out on December 31.

Tetteh has already had spells as an assistant coach and interim head coach of the Black Stars in the past.

"We know what his capabilities are.

"We can bring him back and take him through some very good interview and then give him a target.

"If he can't achieve the target, we fire him."

Former Asante Kotoko coach Charles 'CK' Akonnor has also been strongly linked to the job, while 1978 Africa Cup of Nations (Afcon) winner Mohammed has declared interest in the role too.

“Some of the local coaches just want to coach the national teams because of the chance they will get to travel and make money," Klutse added.

"They don’t care about the team. Because of corruption and the money they will make from milking player’s managers, they want the job.

“I have spoken with many of them to come and coach Inter Allies but they normally say no because they see themselves as national team coaches."

Klutse was a member of the Ghana 1978 Afcon-winning squad.