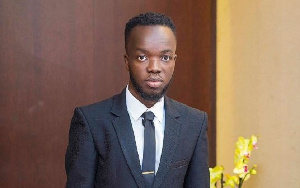 Ghanaian Singer and Songwriter, Gladstone Kwabena Akwaboah Jnr., known in the music circles as Akwaboah has stated that the secret to becoming a great musician is to become familiar with musical instruments.

In an interview with Happy FM’s Doctar Cann on the ‘Showbiz Xtra’ show aired on Saturdays, he said: “As a musician even if you dont know anything about music, you need to know about instruments.

In Ghana that is the problem we have but if you talk about it, people will question whether you have been of help in this area”.

He noted that it will be a difficult task for him to help other musicians in this area because most artistes are wealthy and have already risen to fame .

“Don’t you share the view that it will be difficult for me train artistes who are richer or famous than me in instruments?”, he queried.

Akwaboah disclosed that his skillfulness in the use of instruments was as a result of intense training he received from his dad and in church.

Proving his versatility and his songwriting abilities, Akwaboah will drop the much anticipated song the next day after his annual concert according to a post he made on Instagram.

The title of the song is Praise Melody which features music group TY Crew and produced by himself.