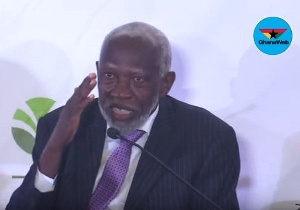 The Board Chairman of the Ghana Revenue Authority (GRA), Prof. Stephen Adei, has called for the celebration of Ghana’s positive ratings, success stories and investors’ confidence in the country’s economy, imploring the media to focus on the good news.

According to him, the investors’ placement of $15 billion (five times the amount required) for the country’s highest-yielding sovereign dollar bond issued recently is “unbelievable confidence” in the economy.

Speaking at a three-day management retreat of GRA in Kumasi, the Emeritus Professor said it is sometimes right to focus squarely on the positive side of things by celebrating the good rather than the bad.

“Today, we live in a country where good news is not news. In the past six weeks, there has been a lot of good news which we should have been celebrating,” he noted.

“First of all, people don’t know that for a month the cedi has not only stabilized, but it has also been improving. For the first time in many years, the first month of the year, the cedi appreciated against the dollar by 3.4 per cent, yet it is no news,” he added.

The economist pointed out that the rating agency, Moody, which is one of the three most reputable firms in the world, had also upgraded Ghana’s economy from stable to positive outlook, and is not being celebrated.

“Just last week … Ghana wanted to raise a bond of $3 billion and investors said they have $15 billion to invest at 6.5 per cent. This is unbelievable confidence in the economy of Ghana,” Prof. Adei stressed.

He added that throughout his life as a 72-year-old man there had been one year that he had seen as much food in the country as this year, and said that was in 1968 where there was a lot of goodwill.

He attributed this year’s food abundance largely to the Planting for Food and Jobs, the Akufo-Addo government’s agricultural flagship programme.

“There is a lot of food in this country and we are not even thanking God for it,” he said and added that it was his hope that Ghanaians, especially politicians, would see the need to hammer on the positive side of things rather than the negative in this year’s electioneering campaign.

According to him, GRA played a positive role in all the success stories of the country’s economy, saying, “The fact that we were able to raise almost GH?5.6 billion in December closed the deficit of GH?3 billion and, therefore, the country had a deficit of 4.7 per cent instead of 5 per cent maximum.”

“If the deficit for the nation had been 5.1 per cent, the cedi would have tumbled. I want to commend you for your hard work,” he told management and staff of GRA.