Home » Lifestyle » Coronavirus: What it does to the body

Coronavirus: What it does to the body 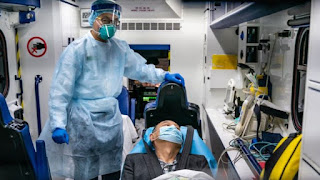 Fighting the new coronavirus has been a battle against the unknown for doctors.

How does it attack the body? What are the full range of symptoms? Who is more likely to be seriously ill or die? How do you treat it?
Now, an account by medics on the front line of this epidemic, at the Jinyintan Hospital, in Wuhan, is starting to provide answers.
A detailed analysis of the first 99 patients treated there has been published in the Lancet medical journal.
Lung assault
All of the 99 patients taken to the hospital had pneumonia - their lungs were inflamed and the tiny sacs where oxygen moves from the air to the blood were filling with water.
Other symptoms were:
First deaths
The first two patients to die were seemingly healthy, although they were long-term smokers and that would have weakened their lungs.
The first, a 61-year-old man, had severe pneumonia when he arrived at hospital.
He was in acute respiratory distress, meaning his lungs were unable to provide enough oxygen to his organs to keep his body alive.
Despite being put on a ventilator, his lungs failed and his heart stopped beating.
He died 11 days after he was admitted.
The second patient, a 69-year-old man, also had acute respiratory distress syndrome.
He was attached to an artificial lung or ECMO (extra-corporeal membrane oxygenation) machine but this wasn't enough.
He died of severe pneumonia and septic shock when his blood pressure collapsed.
At least 10% die
As of 25 January, of the 99 patients:
This does not mean the death rate of the disease is 11%, though, as some of those still in hospital may yet die and many others have such mild symptoms they do not end up in hospital.
Market workers
Live animals sold at the Huanan seafood market are thought to be the source of the infection, called 2019-nCoV.
And 49 out of the 99 patients had a direct connection to the market:
Middle-aged men worst affected
Most of the 99 patients were middle-aged, with an average age of 56 - and 67 of them were men.
However, more recent figures suggest a more even gender split. The China Centers for Disease Control and Prevention said 1.2 men were infected for every 1.0 women.
There are two possible explanations for the difference:
Dr Li Zhang, at the hospital, says: "The reduced susceptibility of females to viral infections could be attributed to the protection from X chromosome and sex hormones, which play an important role in immunity."
And those who were already sick
Most of the 99 had other diseases that may have made them more vulnerable to the virus as a "result of the weaker immune functions of these patients":