Corruption under Mahama was better than Akufo-Addo – Omane Boamah says 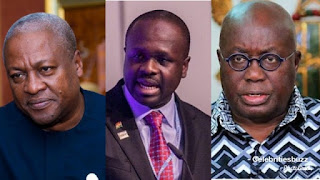 The Former Minister of Communication Dr. Edward Omane Boamah has said that former President John Mahama’s performance in the fight against corruption in the country was much better than President Akufo-Addo’s current efforts.
Referring to the most recent report on the global Corruption Perception Index (CPI), he indicated that the Akufo-Addo government has performed poorly in addressing corruption when compared to the National Democratic Congress’ (NDC) anti-graft fight in four years under Mahama.
Ghana ranked 80 out of 180 countries on the 2019 global Corruption Perception Index, according to Transparency International (TI).
According to the report, Ghana scored 41 out of a possible clean score of 100 – the same score as the previous year, 2018.
“They [the NPP] also said they were going to eliminate corruption. The most credible institution, which is globally accepted is Transparency International. The worst performance of President Mahama’s administration on the CP index is better than the best performance of Akufo-Addo. So when you talk about the elimination of corruption, especially in the procurement of goods and services, etc, that one too they’ve not been able to achieve that,” he noted.
The bottom line is that both parties have failed drastically in the fight against corruption.
What’s your view on what he said? Do we need to consider such a mediocre opinion from any of them?