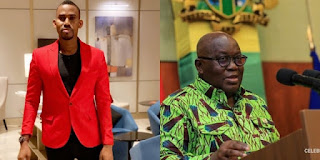 Ibrah One, a young Ghanaian Entrepreneur and businessman who is also known to be a socialite has labeled President Nana Addo’s government as corrupt.
Ibrah One believes every government has got elements of corruption within but the New Patriotic Party is way above.
Ibrah One stated that if one tries to defend their corrupt deeds in his or her bid to cover it, such a person will look stupid at the very end.
He wrote;
“The NPP I know is not the NPP we have now. We know corruption is everywhere in the world but the one under Nana Addo’s government is just too much. Even if you defend them any way you’ll just look stupid at the end.”
Many people might be wondering what at all is making Ibrah One go hard on President Nana Addo’s led administration.
READ ALSO:  Secret chats revealed how Efia Odo's boyfriend Kweku allegedly sold Okomfo Anokye Teaching hospital to a Whiteman (Sreenshots)

Although Ibrah One didn’t reveal instances of corrupt acts undertaken by the NPP, we are very sure he will not hesitate to do so when he is challenged.