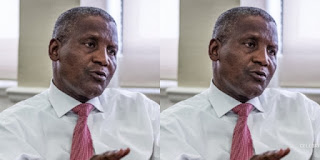 For the ninth year in a row, Aliko Dangote of Nigeria has been declared as the wealthiest person in Africa, with an estimated net worth of $10.1billion, Vanguard reports.
In the latest ranking of the world’s billionaires by Forbes, the American global media company, focusing on business, investment, technology, entrepreneurship and leadership, Dangote’s present worth is down from his estimate of $10.3 billion, a year ago; attributed to possibly a slightly lower stock price for his Dangote Cement flagship company.
Africa has 54 nations, but only eight countries have billionaires according to Forbes, with South Africa and Egypt dominating not only the top 10 richest people in Africa list but in the rankings overall with five billionaires each. Nigeria comes second with four billionaires, including Africa’s richest man, Aliko Dangote.
Nassef Sawiris of Egypt is the new number two richest, worth $8 billion, up from $6.3 billion last year. Sawiris’ most valuable asset is a stake in shoemaker Adidas worth a recent $4 billion. The increase in Adidas’ share price alone added nearly $1.5 billion to his fortune since January 2019.
READ ALSO:  Man beats wife to death on Christmas day