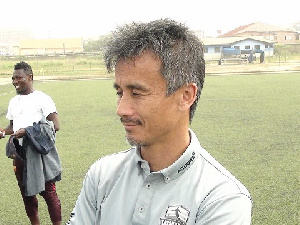 Member of the Board of Directors of Ghana Premier League new boys Great Olympics, Mr. Oluboi Commodore, has confirmed that several coaches have expressed interest in the vacant coaching job at the club including former Hearts trainer Kenichi Yatsuhashi. The Dade boys are currently under the technical direction of assistant coach Seth Hoffman after the resignation of George Koffie last week. The two-time Ghana Premier League winners have been struggling in the ongoing league and are languishing at the 13th position with 10 points. Speaking to Asempa FM, the astute football administrator said both local and expatriate coaches have all expressed interest in coaching the club including the former Hearts of Oak head trainer, Kenichi Yatsuhashi. “Seth Hoffman is in charge temporarily,” he said. “We have received a lot of letters from local and expatriate coaches and we are still deliberating on the right person. “Kenichi Yatsuhashi has expressed his interest in coaching the club. We know what he can offer but as it stands, we are working on the right person,” he added. Great Olympics will be hosted by Legon Cities FC in the match-day 10 fixtures at the Accra Sports Stadium on Friday at 7:pm.