Ghanaian midfielder in trouble over 'Jesus loves you' shirt 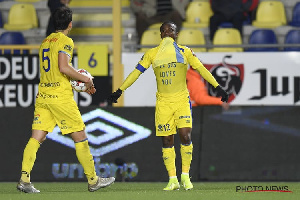 Sint Truiden midfielder Samuel Asamoah has touched on his sending off during their 5-2 win against KAS Eupen in the Belgian Jupilar Pro Elague over the weekend.

Asamoah scored a hat-trick in the game as the Canaries run-riot their opponents 5-2 in front of their supporters at the Stayen Stadium.

The Ghanaian did not complete the match as he was given his marching orders for two bookable offenses.

He was handed a caution by referee Christof Dierick in the 52nd minute before facing the rigorous of the law after partially removing his shirt in the wake of scoring his third goal of the night.

Asamoah wanted to show off the ‘Jesus loves you' inscription on his shirt after netting his first hat-trick in the season.

"Of course I knew that I was not allowed to do that," Asamoah said after the game.

"It was from sheer emotion that I did it. I am especially happy for our team and staff that we are playing such a good game and getting the three points."

"I can't remember when I scored three more times. It must have been a long time ago. I like it. It is a shame that I will have to miss next week's game, but I have every confidence in our team."

Asamoah has scored 4 goals in 24 leagues games for Sint Truiden in the ongoing campaign.