Hearts coach sleeps under a tree 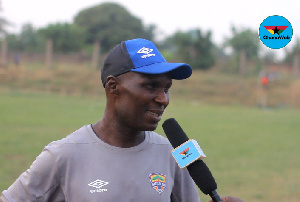 Hearts coach takes GHC5000 monthly sleeps under a tree after training – Opeele
Interim Hearts of Oak coach Edward Odoom is without an office and spends his time after training under a tree, former Kotoko coach Isaac Opeele Boateng has alleged. Odoom was elevated to the head coach position following the sacking of Kim Grant after a poor start to the season. Since replacing the former Ghana striker, Odoom’s Hearts of Oak has experienced a turnaround from the bottom half of the table to seventh. Opeele on the Tuesday edition of the Asempa sports morning show claimed that the management of the club is not serving their coach with the best of treatments. The vociferous technician said that more than two months after handing him the job, Hearts are yet to find an office in their secretariat for the former Tema Youth gaffer. Opeele further asserted that Odoom is on a GHC5000 salary which is 10% what his predecessor was earning monthly. He lamented the poor treatment of the coach and wondered if Hearts would have done that to a foreign coach. “Odoom’s situations saddens me because he’s coaching without an assistant. He’s a very good and experienced coach. If Hearts supported him, he would have scored every team in the league. Give him an assistant and he will deliver”. “I was told by coach Arday that after the job, man must ‘yaazo’. Your pressure normally increases during a game so after the match you need your wife to relax you. After training, he goes for rest under a tree. Is he Jonah to sit under a tree? What if the tree is cursed, what would he do? I heard he takes 50million (old currency). That means the difference between his salary and Kim Grant is 500million”. Opeele’s comments come on the back criticism leveled against the coach by some Hearts fans in the aftermath of their 3-2 victory to Bechem United. Despite the win, some fans are unhappy with Odoom’s tactics and want him out. Opeele urged the fans to direct their anger at the management who he thinks have starved the club of investment.