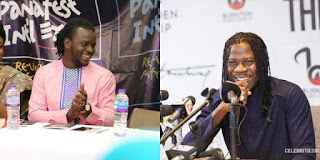 Addi General Boss, Jupitar has warned the media never to compare him to President of the Bhim Nation, Stonebwoy again because he is better than him.
He explained that on the field of success, he is just on the same ladder with Stonebwoy hence, no one should ever label him as an underground artist.
Jupitar bragged that Stonebwoy cannot stand him on any riddim and that he will rate himself better than even Michael Jackson if he is compared to him.
The ‘Enemies’ star added that Stonebwoy is preaching peace but don’t want to follow his sermons.
Read his series of tweets below;
“Henceforth no media should ever compare me again to no Bwoy…
On the field of success, we both have similar achievements.. so who you referring to as an underground?… some of y’all moron fans don’t face facts and taak trash, stop buying ohtbthe arguement.. I said no Bwoy can crash me on a riddim.. keep talking 😏
Like make I accept that irrelevant comparison? You people call for peace yet you refuse to listen well and attack with insults… if it’s btwn me and Micheal Jackson sef I will choose myself… if you no understand go sleep… I’m waaaaay better than your him.”
Yesterday, Stonebwoy subtly dissed Jupitar and he also fired back destroying him in the process.
Fact Of The Matter;
Just yesterday, Jupitar sparked a huge debate on Twitter after publicly challenging President of the Bhim Nation, Stonebwoy.
He noted that he’s the governor of dancehall in Ghana and that Stonebwoy can never come close in any way.
He wrote;
“Yo @zylofon1021fm pundits.. keep your partial judgement.. you really think @stonebwoyb can crash me on a riddim???? General… a mi govern this”
” I keep saying, I don’t have to touch or diss anyone for fame and money when I already have all dat..big man taak.. this morning I see this ” stone crash Jupitar ” and in ghana no Bwoy can crash me and they know.. so don’t twist things ya way.“
Stonebwoy also replied to his tweet on his Snapchat handle.