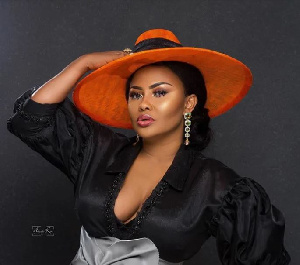 Actress Nana Ama McBrown has revealed the series of traumatic experiences she had gone through prior to being blessed with a child after several years of marriage. In an interview with Stacey Amoateng on her show, ‘Restoration’, McBrown stated that she had gone through so many social battles about her inability to bear a child after marriage, and it includes being accused of selling her womb for fame. “I heard a lot; I had dogs at the time, so anytime I go on set with the dog, I hear comments like she has sold her womb for fame. I heard them all but what could I have done about it? Because I am moving on and shining in the movie industry, they thought I have traded my womb for fame,” she recalled. McBrown also disclosed that she had experienced personal battles as her expectations to have a baby by a certain age started begun to shatter. “It is a natural feeling with every woman, if you get to a certain age and you are not getting pregnant, you get to ask yourself so many questions,” she said. According to actress McBrown, she was encouraged by her husband, Maxwell Mawu Mensah, during those trying times but his morale-boosting acts were not enough as she said she needed a child of her own. “My husband already has two children, and it becomes ‘obvious’ that I am the problem. Sometimes my husband is like ‘don’t worry, I love you’ but after all the cuddle you still feel like it is your problem,” she added. The actress shared her ‘option B’ of going for adoption should all efforts to help her conceive her own child became futile. “I told myself that if I have not conceived by the age of 45, I will go for adoption. If I had gone through all the processes to help me give birth but still not successful, I planned to convince my husband to adopt a baby for me,” she said. McBrown advised all women going through the challenges of having children of their own to not give up, and not forget the power of prayers and medical care. The TV host, however, warned that women who yearn for the fruit of the womb should not make wrong decisions like going to strange places to solve their problem. “I want to tell women who are having it difficult to bear children not to give up. God didn’t create anybody to be barren. Don’t be going to odd places for help if you’re looking for a child,” she concluded.