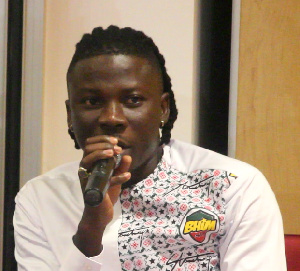 The indefinite ban placed on Stonebwoy is the least of his worries; but a call on the media to grow beyond him and Shatta Wale, according to him, is ridiculous and unacceptable. A day after Shatta Wale labelled Charterhouse, organisers of the Ghana Music Awards, as ‘fools’ for urging the media to rise above the two dancehall giants, Stonebwoy has also expressed utmost disappointment in the company. “May I conclude that Charterhouse does not have the interest of Ghanaian musicians and Ghana music at heart. With all due respect #MrsTeresa I’m disappointed!! Calling on Ghana media to help you quench our careers is a very low blow,” his tweet, Thursday, read. At a press engagement ahead of the 21st edition of the Vodafone Ghana Music Awards (VGMAs), Theresah Ayoade, Chief Executive Officer of Charterhouse, underscored the need to rather focus on other artistes. Her comment was in reaction to whether or not the ban placed on the two artistes will be lifted so they could file nomination for this year’s edition. “Can you as the media help the industry rise above these two? Let’s rise above these two and let the industry breathe and move on,” she appealed. “Sarkodie won artiste of the decade and nobody even talked about it. The industry is bigger than these two artistes and that what I what I want you to go back with. There are a lots of young people who need the opportunity so let’s move on.” Mrs Ayoade mentioned that the ban can only be lifted by the board, stressing that her organization will duly accept the decision of the board. Her remarks infuriated Shatta Wale as the musician on Wednesday launched a scathing attack on the staff of the company. “You guys don’t think, you are fools,” he said in a Facebook live feed. The board of the scheme was not left out. Some salvos were directed to them too! “The Board members, all of you are poor people. What I possess, none of you has, I can pay all of you every month,” he fired. “You don’t have anything. Most of them are disappointed musicians. You don’t know God… Don’t try me. This should be your first and last. Don’t try me. You can try this on Stonebwoy but not me.”
Background Shatta Wale and Stonebwoy were banned indefinitely from the awards scheme, stripped of all the awards they won last year and asked to return the plaques after they disrupted the 20th edition of the event. While Stonebwoy was up the VGMA stage taking his award, Shatta Wale, his rival on the music scene, was seen approaching the stage with a host of others presumed to be his fans. Stonebwoy who felt threatened, pulled out a handgun handed him on stage by one of his entourage, a scene that sparked a scuffle between the two artistes and their followers. The awards event was temporarily halted and the topmost two awards for the event, Most Popular Song of the Year and Artiste of the Year, were deferred due to the melee.