Jean Mensa must take responsibility for any conflict – Mahama 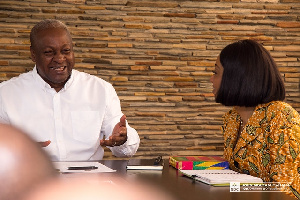 Former President John Mahama has told Chairperson of the Electoral Commission, Mrs Jean Mensa and her colleague commissioners to take responsibility for any conflict that befalls Ghana during the December general elections as a result of the compilation of a new register of voters. Speaking to some fisherfolk who visited him at his Accra office recently, the flag bearer of the biggest opposition party, the National Democratic Congress (NDC), said the stubborn posture of the EC, as far as its decision to compile a new register is concerned, is a source of worry. “You say you want to change the biometric register, if you look at the time left before the elections, you are now going to bring in new devices to compile a new register of voters and also train those who will be in charge of the registration exercise; the time left is not much. “So, if it happens that on 7 December 2020 the machines fail or the elections go awry or several names can’t be found on the register, what are we going to do? That’s why we are telling madam Jean Mensa and the Electoral Commission to be careful”, Mr Mahama said. He told the EC to ensure that Ghana is not left in pieces after the elections. “Before she became the EC Chair, we were living in peace; she shouldn’t bring us any chaos or conflict. This is what we’ve been telling them”. “If they remain adamant and refuse to listen to us, they should own up and claim responsibility for any chaos or conflict that may arise from the elections as a result of the compilation of a new register. “So, we are telling them to tread cautiously because Ghana is a nation of peace. If you are doing something and someone repeatedly cautions you to be careful and you say: ‘We’re Jack Toronto, we’re Champion Atta; we don’t care, we’ll do it; whether you talk or not, we’ll do it’, then it’s up to you’” Mr Mahama said. The NDC and some small opposition parties have been against the compilation of a new register. They see it as a waste of money. They have also argued that there is not enough time for the EC to compile a register for the December polls.