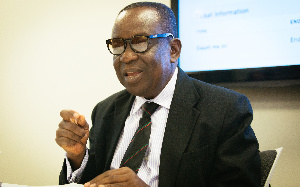 National Security Minster, Albert Kan Dapaah has appeared before parliament today, for the first time after his video went viral.

The minister was present to answer questions on issues regarding the national security sector.

Mr. Kan Dapaah was in the news last month after a leaked video, revealed him lovey-doveying with a lady whom many have described as a side-chick.

The leaked video shows Mr Kan-Dapaah modelling, in his pyjamas, in what appears to be a hotel room while he video-chatted a lady whose long-nailed fingers were the only things about her that could be seen.

In the amorous chit-chat, the national security chief appeared to have let down his guard and was totally under the control of the voice of his seductive interlocutor.

The lover is heard asking Mr Kan-Dapaah if he would miss her while he was on the plane.

"Are you going to miss me when you’re on the flight?" the lady asked the minister, to which he replied: "Of course!"

The lady, who would not show her face, then asked the minister what he was wearing and asked to see it.

"I want to see your pyjamas; I want to see the front, the back; like the way you did it yesterday", she demanded of the minister, who then stood up and modelled in his pyjamas for his interlocutor.

Many, following this, criticised the National Security Head, asking for his resignation whilst many others deemed it a norm which was being blown out of proportion.