Home » News » Kan-Dapaah not fit for Nat’l Security minister; he must go – Bonaa

Kan-Dapaah not fit for Nat’l Security minister; he must go – Bonaa 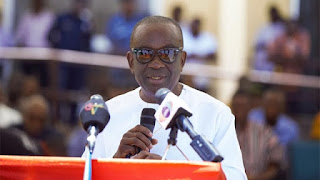 A safety and security analyst, Adam Bonaa, has said if any of President Nana Akufo-Addo’s appointees within the security apparatus ought to be fired, it has to be Mr Albert Kan-Dapaah, the Minister of National Security because Ghana has had too many security challenges under his tenure of office.
Mr Bonaa’s comment comes on the back of the reassignment of the Minister of State at the Ministry of National Security, Mr Bryan Acheampong to Minister of State at the Ministry for the Interior.
Mr Henry Quartey, who was a Deputy Minister for the Interior was also reassigned to become the new Deputy Minister at the Ministry of National Security.
Mr Bonaa told Class News in an interview that the move is not surprising.
He said: “It is something that some of us were expecting because as of yesterday [Wednesday, 12 February 2020], I got wind of some exchanges between honourable Bryan Acheampong and Kan-Dapaah. But you know, after the leakage of Kan-Dapaah’s tape, it was out there that it was a set-up and some people actually alleged that it could be Bryan Acheampong, which I thought that may not be true, but it’s been lingering, and, so, after the confrontation, the president decided to do it [reshuffle] and fast-forward, now he’s been moved.”
In Mr Bonaa’s opinion: “I just think that within the security circles, Kan-Dapaah should be the one who should be going home so that some of these positions are re-aligned well because he has occupied this position for far too long and under his reign, we’ve had too many security challenges.
“I’m not saying he should go home based on the fact that he recently had a tape leaked, but the fact that you can talk of several of them – several security challenges. Several people have been murdered during his time as the national security minister and you crown it with Ayawaso West Wuogon and his own leaked tape and you’ll say that he’s not fit to be at the position of national security.”