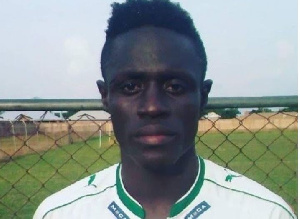 Black Meteors striker Kwame Opoku has completed his medical ahead of his move to Ghana Premier League giants Asante Kotoko.

Opoku underwent a successful medical at the Komfo Anokye Teaching Hospital on Monday and is set to pen a three and half year deal at the club's Secretariat on Tuesday.

According to reports, he is joining the Porcupine Warriors as replacement for Burkina Faso international Songne Yacouba who has refused to extend his contract with the club.

The former Nkoranza Warriors FC star has been club-less after an unsuccessful trials at FK Cukaricki in Serbia.

He earned a call-up to the Black Satellites once but failed to make the final squad for the 2019 Africa Youth Championship staged in Niger.