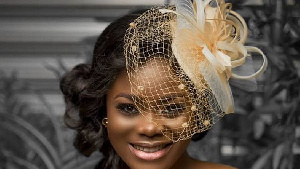 Former Ghana’s Most Beautiful Queen Akua Amoakowaa has, for the first time, opened up about her marriage to business mogul Dr Kwaku Oteng and why she decided to marry him despite their huge age gap, plus becoming a fourth wife.

Akua, who is the fourth wife of Dr Kwaku Oteng, said women who are beauty queens suffer in the hands of men, saying they are chased by men like ‘flies’.

“If you’ve had the opportunity to become a beauty queen, you will understand what I’m about to say. Men chase your like flies,” she told Stacey Amoateng in an interview.

According to her, she chose the old man over young men because he is a ‘humble soul and down to earth’, adding that she gave Dr Oteng a tough time before becoming his fourth wife

“So, I had that opportunity to choose any man that I wanted including people who were bigger and richer than my husband. But I always say this; my husband got me with his humble nature – he is one humble soul. I’ve never met a man like him who is so humble and down to earth.”

“I knew who he was before we dated but I was not out there so all I knew was Dr Kwaku Oteng…he chased me for a long time. He will confirm when you meet him.”

She said dating young guys yielded no good result and that is why she chose Dr Oteng.

“The point is, I dated young guys but yielded no good result. They were not honest and transparent, and some of them would steal your money from your purse. So, what’s the sense in marrying a young guy while people envy but suffer.”

“I always say that even taxi drivers and other people who are not rich have as many as three, four, five, girlfriends. How much more him [Dr Kwaku Oteng].”

Akua also confirmed rumours that she almost walked out of her marriage among other things.

“So, social media trolls affected me. At a point in time, I wanted to get out of my marriage because I felt I’m not a bad person but people see me as evil person because of the kind of person I married. But now, I’ve grown a thick skin for that.”

“I can’t say he is perfect but he is a good man. So, if you sit there and judge him, you don’t know the kind of heart he has.”