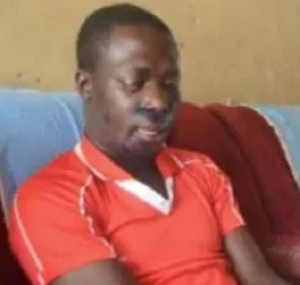 For 31-year-old Augustine Opoku, Sunday, January 12, 2020, will always be remembered with deep sorrow, anguish and regret.

It’s a day that will for the rest of his life remind him of how he fell victim to a police officer’s inability to exercise discretion.

The day promised to be exciting. An impressive start to the league season had seen his darling club Asante Kotoko pick six points from two matches and were going to play Berekum Chelsea on matchday 3.

With his two eyes glued in their natural positions, he left his house full confidence to cheer Kotoko to victory over ‘The Blues’.

In the course of the game at the Baba Yara Stadium fans’ angry and unruly reaction to a ‘legitimate call’ by the referee resulted in a temporary stoppage of the match.

Cool heads will prevail and the game will resume only for the chaos to escalate after the match.

A police officer’s bid to control the angry crowd resulted in him shooting straight into the eye of Augustine Opoku who per eyewitness account had no hand in the disturbances.

A flurry of condemnation statements were issued by all stakeholders. From the Ghana Football Association to the supporter's body of Kumasi Asante Kotoko.

All parties promised their cooperation to the Ghana Police to investigate the issue and punish the culprits.

The Police in their first move interdicted the police officer whose identity has been hidden from the public and assured to deal with the matter with the alacrity it deserves.

However, one month on from the incident, little has been done or said about the issue and there’s a genuine feeling among the victim and Kotoko that the police are shielding their own.

A brother of the victim, Listowel Appiah who spoke to ghanaweb.com revealed the family’s frustration with the process as no headway has been made in the issue.

According to him, the police reached out to the family for the victim’s statement only after he vented their frustrations in an interview with a Kumasi-based radio station.

He said that the Asokwa Police Station who were initially handling the case invited the victim to write his statement. However, after the statement, he was asked to go for a medical report from the Komfo Anokye Teaching Hospital where he was attended to.

The issuance of the medical report has become a headache as all medical doctors who attended to the victim have to make inputs and sign a document to that effect. Having the signatures of all the four doctors who performed the surgery on Mr Opoku has become an elusive exercise.

The brother said that since their visit to the hospital on his brother’s second day of admission, the police have not called or visited the victim.

He said that the only time the police called was after an interview he granted Kessben FM where he lamented their neglect of his brother.

“The police sent him to the hospital and visited the following day but since then we have not heard from them. Two weeks ago, an inspector at the Asokwa police station called and asked me to bring my brothers for his statement. So after the statement, he told us to send it to the hospital for the report and come back after getting the report. I sent it to the hospital and because doctors from different departments worked on him, we have to wait for them to write their reports”.

“As to what happened to the police officer, the family has not been told. No police officer has come to the house to visit or even call to ask of my brother’s condition. We’ve not been given any compensation. Nothing has been heard of the officer. I explained to one journalist at Kessben FM that we have been neglected by the police and it is after that interview that we got the call from the police.

Listowel said that his brother has since the incident developed some hatred for the police. He disclosed that at the sight of a police officer, his brother explodes

“Sometimes he gets angry and sad whenever he sees a police officer. Whenever I’m walking with him, I hold his hands so that he wouldn’t do anything. When the Kotoko officials come around, they also talk to him but sometimes he complains bitterly about the police. He once asked me what I’m going to do the police to do. He is disappointed because when he listens to the radio he doesn’t hear whether the policeman who shot him has been arrested or anything has been done to him.

“We want to appeal to lawyers to come to our aid and ensure that justice is served. I’m calling on everyone to speak for us because you can’t shoot someone and not check-up on him. No one calls to find out how he and his family are coping with the situation”.

“We know what to do if we don’t get justice. And the person who gave the policeman the gun and has gone silent after the incident, if the law allows you to walk freely, we also know what we will do. If it were a police officer who got shot the matter would have been treated differently. If the policeman thinks he’s free, he should know he’s not free like that. He will also lose his life and his entire family”. Grateful to Kotoko

He expressed the family’s gratitude to Kumasi Asante Kotoko and their supporters for their unflinching support to his brother since the incident.

“The Kotoko officials have been very good to us. They have been visiting us and giving us things to take care of our brother. As for Kotoko, they have been very supportive and even came here with the players. Some of the supporters too have also been here.

Kotoko in the dark

An official of Kotoko who spoke to GhanaWeb on condition of anonymity revealed similar frustrations to that of the family. The source said the club has been left in the dark over the issue and attempts to get the police officer and his family to visit the victim have proved futile.

GhanaWeb reached out to the Ashanti Regional Police Public Relations Officer for an update on the investigations since the case has been transferred to the Regional Police headquarters.

However, Assistant Superintendent of Police (ASP), Mr Godwin Ahianyo said he could not comment on the issue as he was recovering from an accident.