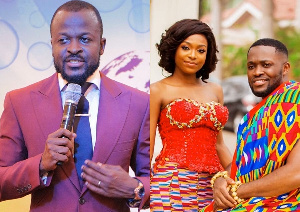 A subordinate pastor of Prophet Daniel Amoateng has shot down reports that he had an encounter with the mother of Tracy Ameyaw before prophesizing how nice and good her wedding will be.

Following the report of a video in which the founder and leader of Power Worship International revealed in 2019 about how beautiful Tracy’s marriage will be, a fake report is being circulated that her mother informed the prophet about whom her daughter was dating before he publicly called the girl to fake the prophecy. However, a subordinate pastor of Prophet Daniel Amoateng who spoke with Owen Ghana on a condition of anonymity debunked the false report. He said the man of God was not aware of who Tracy was dating and he didn’t even know the young woman or her mother before the prophecy was made. According to him, the prophecy came out on the first day that Tracy visited the church of Prophet Amoateng. The anonymous pastor implored Ghanaians and naysayers to glorify God instead of falsifying what He revealed to his servant.


How Tracy’s marriage was prophesied
Volume 90%