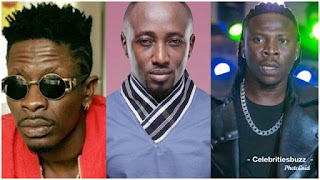 Entertainment pundit, George Quaye, has risen to the defense of the Charterhouse Chief Executive Officer (CEO) after the latter faced criticisms for comments she made about Stonebwoy and Shatta Wale.
Theresa Ayoade’s statement “let us rise above them” – referring to Shatta Wale and Stonebwoy – did not sit well with fans of the artists.
“Can you as the media help the industry rise above these two? Let’s rise above these two and let the industry breathe and move on. Sarkodie won artiste of the decade and nobody even talked about it.
“The industry is bigger than these two artistes and that is what I want you to go back with. There are lots of young people who need the opportunity so let’s move on,” she said at a press conference
However, Mr. Quaye explained that the statement was made in context and in no way meant to suggest the company wanted the death of two of Ghana’s biggest dancehall artistes’ careers.
READ ALSO:  "I swear I will comot gun anywhere I seeu & if they cease it, I will show you I have more guns" - Shatta Walethreatens Stonebwoy

The former Public Relations Officer for Charterhouse told Andy Dosty on Daybreak Hitz on Hitz FM, on Tuesday that, the company had called a press conference to seek the input of industry players and media on how to make the next Vodafone Ghana Music Awards a great show.
But, according to Mr. Quaye, for over an hour journalists and other guests were fixated on Shatta Wale and Stonebwoy although the organization in 2019 announced the ban of the two artists from the scheme.
“At a point, it almost became an argument at the auditorium, for almost an hour two artistes, so within that context, the woman spoke and said look, let us all come together and let us rise above them…” he stated.