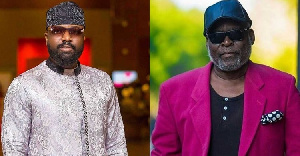 Kofi Adjorlolo’s outburst gave credence to suggestions there are cracks in the movie industry. It highlighted the need for stakeholders to put in the necessary measures to change the narrative.

Nothing short of this! Not a pompous Elikem Kumordzie rebutting in a manner which only escalated the gravity of the issue; nor a needless statement issued by the Film Producers Association of Ghana (FIPAG).

Mr. Adjorlolo, a veteran actor had in an interview expressed fury over some movie producers’ refusal to pay him after they engaged his services. Having quit his broadcasting career after 17 years to venture into acting, the least he expected was to be treated unfairly.

“Some of the producers in Ghana here, they should respect themselves...old man like me, they call me to come and work and they can't pay me...,” a seeming frustrated Adjorlolo complained.

What irked him the most was the fact that he is said to be worth $800,000 when in actual fact, he has been starved for years. While stating that many Ghanaian movie producers do not pay actors for their roles in movies, the veteran intimated that a number of actors are still in the business because of the passion they have for it.

“About seven producers in this country owe me monies…why? And then I’m sitting at home, I'm hungry, and then when I’m sick too nobody pays attention,” he fumed. “Look we have elderly people lying down on their sickbeds and these producers owe them. Actors in Ghana here know what I’m talking about, these producers don’t pay!"

Interestingly, FIPAG found Adjorlolo’s claim mischievous and accused the actor of casting a slur on the association. They expected him to “use internal structures” and demand what is due him. They association further said Adjorlolo should have mentioned the names of his debtors rather than leaving people to wonder who these seven persons are.

“You’ve not reported to Actors Guild nor FIPAG, neither did you mention names… Then at the end of the day, you come out to make unnecessary complains and say negative things,” James Aboagye, president of the association said in an interview with GhanaWeb.

With a 14-day ultimatum, Adjorlolo is to render an unqualified apology to FIPAG – “failure to do so would see the association advice itself on his status and positioning in the film industry.”

Perhaps someone needs to point out to FIPAG that not all film producers are members of the association, hence a claim that some movie producers have failed to pay Adjorlolo should not warrant a threat printed on its letterhead in the form of a statement. The actor did not mention names, it is unclear if some of the debtors or even all are FIPAG members. How then can FIPAG conclude Adjorlolo has smeared the reputation of the association with mud? Besides, whichever legitimate means one decides to ask for what is due him, should not be the headache of a passerby.

A serious association would entreat members to respect actors, eschew all manner of unprofessionalism etc for the good of the industry.

The most shocking person in this episode is actor and fashion designer Elikem who confirmed producers do not pay and suggested actors get a day job instead of complaining.

“This goes to all other actors, you can't wanna do entertainment and not have a day job,” he advised.

Truth be told, this counsel would have been duly welcomed if the timing was right. A producer fails to pay for the services of your fellow and the best you could do was highlight the need for a day job? Pathetic!

And to think nobody would do worse to get monies owed them paid because they have side jobs is highly ridiculous.

Elikem solved no problem. He only worsened the plight of Adjorlolo in his attempt to make the whole world know he [Elikem] has more than one job and is filthy rich to the extent that he will not chase his debtors.

What Elikem may not know is the fact that his statement was an endorsement of the unprofessional posture of the movie producers. It was shallow! If he thought twice, he would have rather criticised them and offered better solutions especially when several actors have also accused some movie producers of doing same.
Apology and retraction

Certainly, there was no need for Elikem to have retracted the apology he made to Adjorlolo regardless. Tempers flared during their encounter on Peace FM, Saturday. It was very heated.

“You know I read something on the net that they said you have to apologise to me and you know what I said? I said go and apologise to Famous, your father Famous Kumordzie on his graveside because I served him and he loved me...so when they told me about you, I said why, how? I didn’t want to talk…” said Adjorlolo.

“I apologized because everyone was making this about you but I didn’t say anything against you. It’s not fair that you were interviewed and you say what you want to say and I have said mine and you want me to apologise to my father in the grave. I have retrieved my apology now from you...” retorted Elikem.

It does appear Elikem misunderstood the veteran who was obviously hurt by the ‘day job’ comment. He must have taken it as an insult, hence his retraction. Adjorlolo by his remark suggested that Elikem rather disrespected the late father for postulating that he [Adjorlolo] was not hardworking. He expected Elikem to have joined him in the fight rather than compounding his woes.

Did Elikem even expect Adjorlolo to accept an apology with the caption: "An Apology also to Kofi Adjorlolo. Let's come together as actors. Let's not complain"?

How remorseful was that when he maintained that Adjorlolo's decision to complain about not being paid was a gaffe?
Fixing the mess

The back and forth is a call on stakeholders to sit up and see to the growth of the industry. The structures are obviously not well laid. If there were written contracts, there could have been a better way for Adjorlolo to demand what is due him. If Ghana Actors Guild were strong enough and effective, the association could have in a way assisted its member to retrieve his money. If FIPAG were as serious as it should be, a premature statement would not be released in the name of saving the face of the association. The time to act is now!