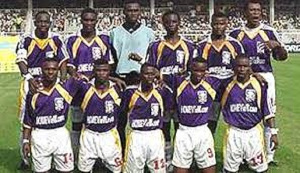 On this day 11 February 2001 (Exactly 19 years ago today) Ghana’s Accra Hearts of Oak won the African Super Cup – the Felix Houphouet-Boigny trophy – by scoring a goal in each half to beat Zamalek of Egypt, 2-0.

The game in Ghana’s second-largest city Kumasi, pitted the continent’s two best clubs against each other to determine which one really deserves to be called the very best on the continent.

Charles Taylor opened the scoring for Hearts of Oak. It was the Ghanaian side’s fourth trophy of the season after winning Ghana’s league and FA Cup, and the African Champions League in December.

The opening goal came in the 12th minute through Charles Taylor who pounced on a mistake by the Egyptian goalkeeper, Abdelwahed El Sayed.

The Egyptian fumbled as he was challenged for an airborne cross by Hearts striker, Ishmael Addo.

Within a minute of the second half, Ghana’s Footballer of the Year, Emmanuel Osei Kuffour, scored Hearts’ second goal, with a rather harmless-looking shot after picking up a cross by midfielder, Edmund Copson.

The hosts could have scored more goals but Hearts’ deadly trio of Kuffour, Addo and Taylor squandered many chances; to the annoyance of many of their fans.

In the 80th minute Addo curled a volley at the Zamalek goal which went just inches wide as El Sayed crashed himself into the post trying in his efforts to avoid conceding a third goal.

Hossam Hassan failed to sparkle for the Egyptians. Zamalek showed several flashes of themselves, but their efforts amounted to very little and even their top player Hossam Hassan had to be substituted in the second half.

In one memorable Egyptian miss, veteran star Khaled El Ghandour shot wide before the interval with a lot of space to draw the tie level.

Walid Abdelatif nearly pulled a goal back for Zamalek in the 59th minute, but Hearts’ Daniel Quaye intervened to clear the ball from the goal line.

The top scorer in the Egyptian league, Tarek El Sayed, was the most influential in the Zamalek team but Hearts of Oak won all the duels in midfield.

Hearts played host to Zamalek in Ghana’s second-largest city Kumasi – which is not their home ground – because the club was banned for a year from playing any continental club games at the Accra Sports Stadium.

The decision was reached by Caf over the following the unruly behaviour of Hearts fans at the Champions League final in Accra on December 17, 2000 against Esperance of Tunisia.