Home » Sports » We are at a disadvantage - Kotoko coach Maxwell Konadu

We are at a disadvantage - Kotoko coach Maxwell Konadu 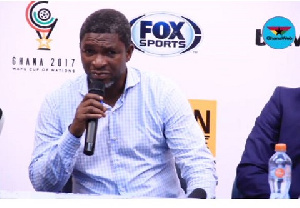 Asante Kotoko coach Maxwell Konadu reveals his outfit has good knowledge of Ashanti Gold ahead of their regional derby in the Ghana Premier League on Sunday.

The two sides are set to rekindle their rivalry in a matchweek 10 fixture at Kumasi's Baba Yara Sports Stadium.

Kotoko come into the game on the back of a 1-0 triumph over Dreams FC while AshGold similarly pipped Liberty Professionals by the same score following a 0-0 draw with Hearts of Oak.

“We will meet as a technical team and map out the strategy we are going to deploy against Ashgold,” he said as reported by Ghanaguardian.

“We saw them against Hearts [in matchweek eight] and if they play the same way, I think we have an idea of their strategies and systems.”

Konadu also spoke about their home challenges as they continue to serve a ban to play behind closed doors for hooliganism.

“I have said it over and over again [that] playing without our supporters isn’t good," added the coach.

"We see ourselves as being at a disadvantage.

“It is not the best for us but I think that [match against Ashgold] is the last and we will go and kill it and make sure that when our supporters are back, we will play up to expectations.”

Kotoko and AshGold are one of five teams jointly tied on 17 points atop the league table.