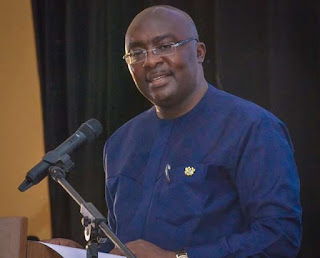 Vice President Dr Mahamudu Bawumia has given the Akufo-Addo government plaudits, stating it has within three years ensured prudent management of Ghana’s economy, making it one of the robust in the continent.
The current government, he argued, is managing the economy better than it was during the eight year rule of the National Democratic Congress under the late John Mills and John Mahama.
“As a result of good fiscal discipline, the fiscal deficit on cash basis has declined from 6.6 per cent of rebase GDP in 2016 to 3.8 per cent in 2018 or 0.8 per cent in 2019 below the fiscal role of 5 per cent.  We are managing the public finances better,” he said at the first town hall meeting for 2020 in Kumasi Tuesday.
For the first time in a decade, he said, Ghana has recorded primary balance surplus in the last three successive years due to the implementation of good and prudent fiscal management, which he said, has slowed down the rate of the country’s debt accumulation.
Despite Ghana’s debt stock moving from 122 billion cedis in 2016 to 214 billion cedis in November 2019, the vice president contended that Ghana’s debt rate accumulation has slowed.
“The total public debt has increased from 122 billion cedis in 2016 to 214 billion cedis that is 62.2 per cent of GDP at the end of November 2019 but this includes the cost of the banking sector cleanup which as you know, is over 13 billion cedis and counting. Excluding the cost of the banking sector clean up, the debt stock stands at 203 billion or 51.9 per cent of GDP.
“However,” he explained, “if you look at these debt dynamics, the strong fiscal adjustments that has taken place, and better debt management has meant that the rate of debt accumulation has slowed down considerably, the lowest in a decade”.
The eight years under the NDC, he said saw Ghana’s debt stock increased by 267 per cent, and  noted that between 2012 and 2016 it  increased by another 243 per cent but between 2016 and 2019 the increase has been 79 per cent.
“So there is a big difference,” he stated.
According to the former deputy governor of the Bank of Ghana, “Even though the quantum of the debt has gone up, we are paying less as a percentage of our annual income to service that debt, and that is good economic management”.
The vice president said the challenge was huge at the time that they assumed office in January 7, 2017 yet it has within the short three years worked to turn it around as promised Ghanaians during the 2016 electioneering.
By Stephen Kwabena Effah|3news.com|Ghana