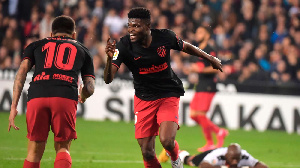 English giants Chelsea have joined the long list of top European clubs chasing the signature of Black Stars midfielder Thomas Partey. The Blues are interested in bringing the Atletico Madrid ace to London but will face competition from rivals Arsenal. Both clubs are willing to trigger the £45million buy-out clause in Thomas Partey's contract at Atletico Madrid, which would expire in 2023. Chelsea have struggled this season largely because of the absence of dependable defensive midfielder Ngolo Kante. Manager Frank Lampard has had to rely on Gorginho and now Billy Gilmour, who was promoted from the youth team. Meanwhile, Thomas Partey's form in Spain and Europe has warn him a name and his dominating performance against Liverpool in the last 16 of the UEFA Champions League sums it all. Partey has also aroused interest from neigbours Real Madrid, whose manager Zinedine Zidane is a big admirer of the Ghanaian. Innter Milan, AS Roma, Manchester United and AC Milan are the other clubs to have previously showed interest in the highly rated midfielder.