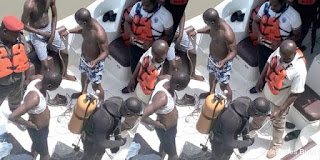 A man after stupidly killing his girlfriend attempted to commit suicide by jumping into a Lagoon.
The good news is that, he instead landed on the log of tree closer to the Lagoon and had to be rushed to the hospital.
The Lagos State Police Command disclosed the main reason behind the man who is 28-year-old and recognized as Princewill David’s action.
According to the report, Hakeem Odumosu, David had a misunderstanding with his girlfriend and killed her in a hotel.
He attempted to take his own life aftermath but it failed.
On the said day after killing his girlfriend, the suspect hired Uber from Igando around midnight and on getting to the Third Mainland Bridge all in Nigeria, told the driver to stop.
He immediately alighted and jumped into the Lagoon.
He gracefully landed on logs of wood and was rescued by the police, who rushed him to the hospital.
After investigation, his sinful action was unveiled.
He is currently locked behind bars and undergoing investigation.