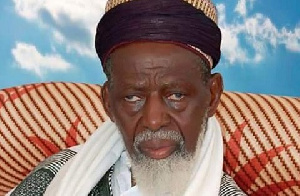 The National Chief Imam of the Republic of Ghana, Sheikh Osman Nuhu Sharubutu has said Muslims can take alcohol under exceptional circumstances which include periods of thirst and dehydration. The Chief Imam said this when he called on Ghanaian Muslims to adhere strictly to protocols announced by the government to combat the spread of the coronavirus disease including not gathering at the Mosque to pray. He said the “context of the Mosque ban is acceptable in Islam as even alcohol, which is “haram” in Islam may be taken under some circumstances. The Chief Imam made the pronouncement through his spokesperson, Sheikh Aremeyaw who urged Muslims to be law-abiding and respect government protocols on Covid-19 prevention. “Under the circumstance, the call by the Chief Imam for Muslims to adhere to the protocols falls under the feature of contextualization. The context within which we find ourselves dictate what we have to do.” sheikh Aremeyao said. “There are several texts of the Holy Qur’an that suggest and give an indication of how modest and flexible the sharia is.” Sheikh Aremeyao cited situations where certain things which are not permitted under sharia, are permissible under certain situations. Addressing the press conference on Monday to respond to the latest precautionary protocols announced by the government, which includes the suspension of congregational prayers in mosques, the Chief Imam said the measure should be adhered to by Muslims because it is well-grounded in Islamic principles of promoting good health and preservation of life